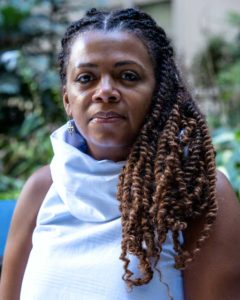 Joia A. Crear-Perry, MD, FACOG is a physician, policy expert, thought leader and advocate for transformational justice. As the founder and president of the National Birth Equity Collaborative (NBEC), she identifies and challenges racism as a root cause of health inequities.

She is a highly sought-after trainer and speaker who has been featured in national and international publications including Essence and Ms. Magazine. In 2020, Dr. Crear-Perry was honored by USA Today in its “Women of the Century” series and featured on ABC Nightline’s Hear Her Voice.

Dr. Crear-Perry has twice addressed the United Nations Office of the High Commissioner for Human Rights to elevate the cause of gender diversity and urge a human rights framework toward addressing maternal mortality. Previously, she served as the Executive Director of the Birthing Project, Director of Women’s and Children’s Services at Jefferson Community Healthcare Center and as the Director of Clinical Services for the City of New Orleans Health Department.

Dr. Crear-Perry currently serves as a Principal at Health Equity Cypher and on the Board of Trustees for Black Mamas Matter Alliance, Community Catalyst, National Clinical Training Center for Family Planning and the UCSF PTBi.

After completing undergraduate studies at Princeton University and Xavier University, Dr. Crear-Perry received her M.D. from Louisiana State University and completed her residency in Obstetrics and Gynecology at Tulane University’s School of Medicine.

She is married to Dr. Andre Perry and has three children: Jade, Carlos, and Robeson.

Her love is her family; health equity is her passion; maternal and child health are her callings.

Areas of Interest
Go to Top